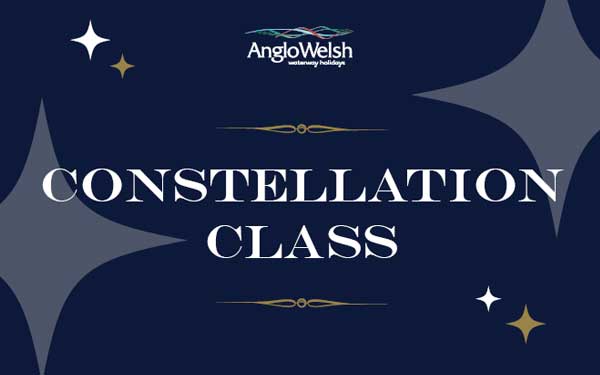 Hot on the bow waves of our popular Bond Class boats, we’ve continued listening to what’s most important to our customers and in 2016 we are reaching for the stars with the first six narrowboats from our exciting new ‘Constellation’ class.

Currently being constructed in Yorkshire by Silsden boats, these awesome new stars of our fleet will feature the same exacting standards of craftsmanship, comfort and finish as our Bond Class fleet.

Constellation boats will include: full-size showers; a range of flexible and private berths; solid fuel stoves on the four and six berth boats; a large TV and Wifi; spacious kitchens with modern fittings and lighting; and a smart new livery.

Available from our Bradford on Avon base on the Kennet & Avon Canal in Wiltshire from Easter 2016, the 12-berth ‘Andromeda’. For short break holiday destinations, choose from the World Heritage Status City of Bath or the base of the Caen Hill Flight. Pewsey, Great Bedwyn or Hungerford can be reached on a week’s holiday.

The new four-berth ‘Aquarius’ will to be based at Trevor base on the Llangollen Canal in Wrexham from 11 March. Short break destinations from this popular location, just two minutes from the World Heritage Status Poncysyllte Aqueduct, include Ellesmere, Llangollen and Whitchurch. On a week’s holiday, boaters can cruise on to Wrenbury or Barbridge.

At Wootton Wawen, the new four-berth ‘Aquila’ will be available for hire from 18 March. Our Wootton Wawen canal boat hire base is on the Stratford Canal near Henley-in-Arden in Warwickshire, offering short breaks to Stratford or Hatton, and weekly cruises to Warwick or Birmingham.

Bunbury will offer the four-berth ‘Carina’ 6 May and six-berth ‘Cassiopeia’ from 25 June. This base on the Shropshire Union Canal in Cheshire provides short breaks to Chester, Whitchurch or Anderton Boat Lift and weekly cruises to Llangollen, the Four Counties Ring, Caldon Canal or Macclesfield.

Finally, the 12-berth ‘Delphinus’ will be at our Oxford base from 13 August offering canal boat holiday-makers the chance to travel along the River Thames in luxury, heading to Lechlade, Oxford or Wallingford on a short break. On a week’s holiday, Henley is in reach on the River Thames or Banbury on the Oxford Canal.

*Price includes damage waiver but not fuel. Fuel deposits are £50 for short breaks and £90 for week long holidays.