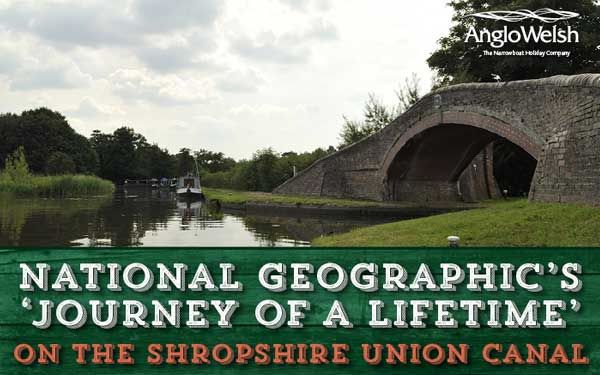 Is there any better way to discover the natural beauty of England and Wales than drifting along a picturesque canal on a narrowboat? Well, if you’re one of those savvy customers who never books a holiday without first securing references from impeccable sources, how about a canal trip recommended by the world’s most prestigious travel magazine?

National Geographic’s ‘Journeys of a Lifetime’ presents a mouth-watering range of destinations, adventures and modes of transport, and taking centre stage alongside Trans-Siberian railways journeys, treks to Mount Kilimanjaro and horse-riding in the Andes is a long-time Anglo Welsh favourite. A narrowboat journey along the Shropshire Union Canal in the West Midlands is selected as one of the world’s ‘Top 1o canal trips’, rivalling prestigious names like Panama, Amsterdam and the Baltic Sea Canal in the waterway stakes.

As lovingly described by National Geographic, “The Shropshire Union Canal meanders through gently rolling landscape and hills, and across valleys via deep cuttings and magnificent bridges. The canal is a monument to the early days of the industrial revolution; the brightly painted narrowboats also seem to come from another era. Boats go at walking speed so that their wakes don’t erode the banks.”

In reality, the plaudits from National Geographic’s travel experts merely confirm what Anglo Welsh insiders have known for years. As part of the ‘Four Counties Ring’, the Shropshire Union Canal – or as locals call it, the ‘Shroppie’ – is at the heart of the Inland Waterways’ most popular circuit, and to ease a narrowboat along its 66 miles (106 km) and through 47 locks is to embark on a non-stop voyage of discovery.

Anglo Welsh’s base at Bunbury in Cheshire is the perfect starting point for a cruise along a peaceful stretch of the Shropshire Union Canal before taking the Middlewich branch to the world famous Anderton Boat Lift. Further south, our base at Great Haywood in Staffordshire provides easy access to all four ‘Rings’ and the opportunity to explore a region that is rich in history, from stately homes and gardens to picturesque villages and welcoming pubs.

Stretching across the border into Wales, the Llangollen and Montgomery canals are the modern names of branches of the Shropshire Union network. Hiring a narrowboat from Anglo Welsh’s Trevor base on the Llangollen canal, you can immediately navigate over the Pontcysyllte Aqueduct, 126ft (38 metres) above the River Dee. The legendary ‘Stream in the Sky’ was granted World Heritage status in 2009 and if National Geographic ever decides to list the world’s top 10 aqueducts it’s a racing certainty to join the Shropshire Union Canal as a journey of a lifetime.