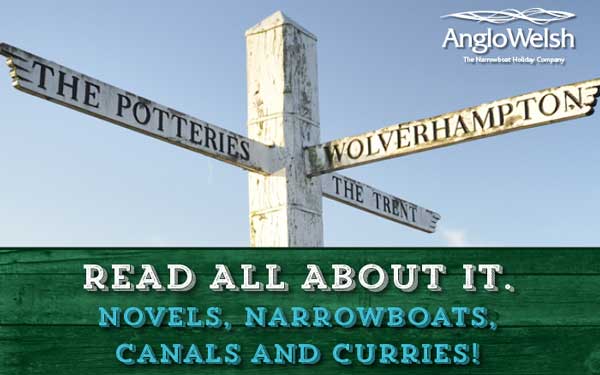 Schools Out for Summer! Save 20% on Canal Boat Holidays 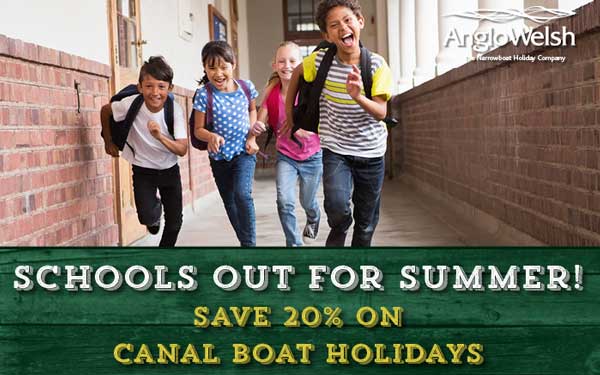 Question. What do most kids want from their summer holidays? Answer. Fun and games, fresh air and adventure, ice cream and “lashings of ginger beer”. As for mum and dad, how about all of the above plus tremendous value for money? Agreed? Then happily Anglo Welsh has the perfect solution for the 2016 school holidays.

This summer we are offering canal getaways for all the family at 20% less than the brochure price*. That means savings of up to £435 for this year’s school holidays. And with 160 modern narrowboats (2-4 Berth, 5-8 Berth and 9-12 Berth) at 11 prime locations across the inland waterways of England and Wales, Anglo Welsh has a convenient starting point for families large and small, wherever they are.

Ever since British Waterways became the Canal & River Trust in 2012, they’ve multiplied their efforts to improve public access to the UK’s canal system and get families interested in exploring the waterways, either by boat or by simply visiting for a day.

For younger kids, cruising on board a 57-foot narrowboat along winding canals surrounded by nature is a real thrill. Think about how excited they get riding a double-decker bus and multiply by ten! Your wide-eyed adventurers will love navigating on the water, devouring picnics on deck, feeding the ducks, and giving dad steering instructions. And when the kids (or the dog) need a walk, the pit stops aren’t half bad either! Forests, parks, gardens, historic towns, stately homes, children’s activity trails: the entertainment takes care of itself, much of it at no extra cost.

As for older children with enquiring minds, what better way to explore the world of water than on a canal boat passing through ingenious locks and across soaring aqueducts? To see a Victorian lock raising and lowering troughs of water big enough to hold two narrowboats is to get a practical lesson in science, history and engineering direct from the industrial age. And given that every Anglo Welsh boat has a wi-fi connection**, your teenage professors can even do their follow-up research in the evening (in between staying in touch with their friends on Snapchat, Instagram and WhatsApp).

But be warned, your kids might get hooked on narrowboats for life. “Anglo Welsh has offered family holidays for over 40 years,” says Sandra Bonomini, herself part of Anglo Welsh’s booking team for more than 25 years, “and many of the children who first came here with their parents now come back every summer with their own offspring. Holiday memories really bind families together, and the magic of canal boat holidays seems to cast an everlasting spell.”

*At least one person under the age of 16 must be on board. Terms and conditions apply. **All Anglo Welsh boats have WIFI except boats cruising from Silsden and Sally Narrowboats. 1GB of data per week break, subject to connection and signal. 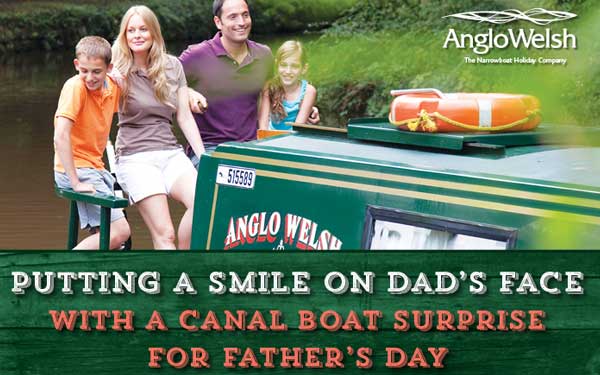 Let’s be honest: it’s really hard shopping for Father’s Day. Especially if your dad is a ‘Been there, done that, got the t-shirt’ kind of guy and your budget doesn’t quite stretch to a week in Las Vegas. Luckily, Anglo Welsh has the perfect solution to those annual gift dilemmas for Father’s Day, celebrated this year on Sunday June 19th

Anglo Welsh has been doing narrowboat holidays for 40 years now, so as you can imagine, we’ve handled all kinds of Father’s Day bookings in our time. Some were memorable one-offs; others have gone on to become annual rituals. We take bookings for high-spirited cruises involving all the family across the Father’s Day weekend, but we also offer week-long holidays or peaceful midweek breaks for dad (and his better half!) to be taken later in the season.

One thing’s guaranteed, wherever your father lives and whatever his tastes in holidays and leisure, Anglo Welsh has got a trip right up his street (or canal). Our 11 starting bases stretch from Silsden on the Pennine Route all the way down to Bradford on Avon in the picturesque Cotswolds. We offer routes for experienced cruisers and circuits for complete beginners, and with a fleet of 160 narrowboats there’s something for large families (9-12 berth) and small families or couples (2-4 berth) alike.

If your dad is a nature lover our routes take in stunning countryside, sinuous waterways and abundant wildlife. If he’s more of a culture vulture, Anglo Welsh has got moorings in Bath, Oxford and Stratford upon Avon. And if a slap-up meal in a quaint canal-side pub is your family’s idea of heaven, you will really be spoilt for choice. We’ve even got discounts on flotilla bookings if your dad’s role model is Steve Martin, the father of 12 children in ‘Cheaper by the Dozen’!

So to end where we started, we’re pretty sure your dad doesn’t really need more socks, tool kits or BBQ-scented cologne. By contrast, a narrowboat trip is the perfect Father’s Day gift because it gets him out of the shed, on to glorious waterways, and last but not least, mum has a fabulous time too.

To make a booking or to talk about what kind of canal holiday is your perfect Father’s Day gift, please call our friendly Booking Office on 0117 304 1122.