Festive frolics on the Canals – Christmas jumpers are optional, having fun is a must! 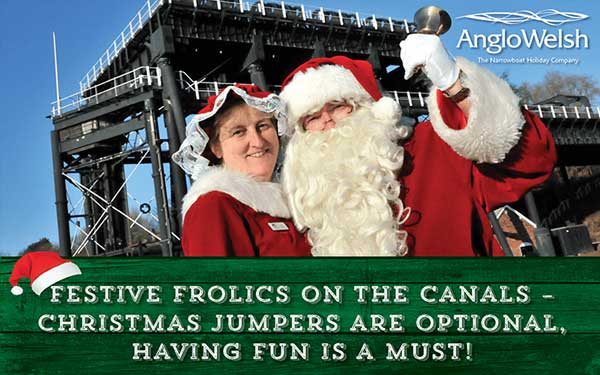 If like everybody here at Anglo Welsh you can never get enough of the UK’s fantastic waterways, why not take a break from the Christmas shopping to attend one of the many festive events on the canals this December?

The Trent and Mersey Canal Open Weekend (December 2nd and 3rd) at Derwent Mouth Lock is a great place to start. There will be a heritage trail for adults and children alike, old photographs of the lock that show how it has changed over the years, plus Christmas carols and the chance to enjoy a tipple from the local micro pub. You also get to see the historic boats, ‘Trout’ and ‘Dove’, and watch Shrek the workhorse demonstrating how to pull a narrowboat.

Also on the Trent and Mersey Canal, Santa swaps his sleigh for a trip boat as the iconic Anderton Boat Lift plays host to a series of seasonal cruises along the River Weaver (every weekend in December, plus Thursday 21st and Friday 22nd). There will be festive stories and songs and a place to play in the new boat lift inspired play area. You will also get a chance to take ‘elfies’ with Father Christmas and best of all, Santa will make sure every child gets a seasonal gift.

Returning for a second year, the Bradford on Avon Market is getting festive (December 2nd and 3rd) on the Kennet and Avon Canal. Come along to the Christmas themed Floating Market for mulled wine and carols, with many of your favourite traders and some exciting new faces.

Further east in Wiltshire, the Wilts & Berks Canal Trust is organising Christmas Boat trips on the Swindon-based narrowboat ‘Dragonfly’ throughout December. Come and meet Santa every weekend from December 2nd and 3rd to December 16th and 17th, and then daily up to and including Saturday 23rd December – and yes, there will be Christmas presents for all the children!

This year the Roving Canal Traders Association are holding their first Christmas Floating Market in Berkhamsted on the Grand Union Canal near Hemel Hempstead, Hertfordshire. Pop along and find your favourite traders to buy some ‘not on the High Street’ unique Christmas gifts for friends & family. The market will run from 10am to 5pm on Saturday 9th and Sunday 10th December, and weather permitting there will be illuminated boats trading in the early evening on Friday 8th.

Christmas wouldn’t be Christmas without a concert from the Wirral Singers and Ringers at the National Waterways Museum in Ellesmere Port. This year’s annual celebration takes place on December 9th. Enjoy the singers who sing because they love it and have fun, and the ringers who also call themselves the humdingers – because most of their members are taken from the choir and therefore both hum and ding! Boom Boom! Performance starts at 7.30 pm and the £7 ticket includes tea/coffee and a mince pie.

The iconic Foxton Locks in Leicestershire once again plays host to a very special Christmas event – the Foxton Illuminated Festival (December 16th and 17th). This year a huge water fountain forms the centre piece of activities including bars, food stalls, music, theatre performances, fair ground and of course stunning illuminated canal boats. The best dressed boat will win the prestigious Foxton Illuminated Cup! Due to the overwhelming success of last year, this year’s event is being held over two days and entry is by ticket only.

For more information on festive events on and around the canals, plus confirmation of dates and times, visit canalrivertrust.org.uk. All together now, “Ding dong merrily on high…” 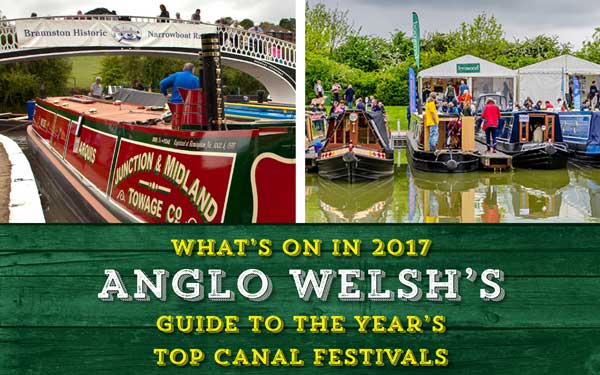 Literary giant Dr Samuel Johnson famously said that “when a man is tired of London, he is tired of life”. Here at Anglo Welsh we reckon you could say the same thing about canals! Every year there is an action-packed calendar of festivals and boat shows on the waterways near our 11 bases in England and Wales, and 2017 is no exception.

Dr Johnson’s hometown of Lichfield lies just a few miles by waterway from the historic Shropshire Union Canal, a firm favourite among holidaymakers departing from Anglo Welsh’s Great Haywood and Bunbury bases. Taking place just cruising distance from both bases is the 18th annual Audlem Festival of Transport (30th July), where a record number of vintage canal boats are expected at the Audlem Wharf next to Audlem Mill and the Shroppie Fly. For all-round transport buffs, there will also be a parade of 300+ vintage cars, vans, trucks and buses.

The Skipton Waterway Festival (29th April – 1st May) on the Leeds and Liverpool Canal near Anglo Welsh’s Silsden base will see narrowboats lined up along the Skipton Basin and surrounding towpaths. The North Yorkshire event also features specialist attractions like the ‘Birds of Prey’ show and the ‘Bark-ing mad wood turners’, plus a host of children’s rides. The Silsden to Skipton stretch of the Leeds and Liverpool Canal runs through a beautiful part of Yorkshire and offers gorgeous views of the South Pennine countryside and old stone-built villages.

The Crick Boat Show (27th – 29th May) in Northamptonshire is Britain’s biggest inland waterways festival. Visitors can take a free trip out onto the water to experience the Grand Union Canal on a vintage canal boat, and for nostalgic narrowboaters there will be a unique show of historic boats dating back as far as 1909. The Crick event is organised by Waterways World, a must-read monthly magazine that explores the UK’s waterway systems, tests the latest boats, and looks into the history and heritage of our canals.

There will certainly be plenty of canal history and heritage on offer at the Foxton Locks Festival (17th – 18th June) near Market Harborough on Anglo Welsh’s East Midlands Circuit. Waterway enthusiasts will tell you the highlight is witnessing boats getting up or down the hill through the famous Foxton locks and the amazing inclined plane, but that’s not the only thing on offer. Leicestershire’s much-loved festival boasts a fantastic range of historic boats to enjoy as well as craft marquees, a music festival and the ever-popular Fun Dog Show.

Another early summer highlight comes in the shape of the Braunston Historic Narrowboat Rally and Canal Festival (24th – 25th June) near Daventry in Northamptonshire. Over 80 historic boats will gather at the picturesque marina located on three Anglo Welsh circuits – the Warwickshire Ring, South of England Circuit and East Midlands Circuit. There they will take part in parades with expert commentary; other attractions include a real ale beer tent, boat exhibitors, waterways artists, live music, and Morris dancing.

For canal goers who enjoy spectacular festivals and thrilling boat shows, 2017 will clearly be another busy year on the UK’s waterways. To paraphrase Dr Johnson; if a man, woman or child is tired of canal festivals and Anglo Welsh narrowboats, they are tired of life!

Anglo Welsh’s friendly staff at our 11 bases in England and Wales will be delighted to recommend the best local boating events. To book a narrowboat holiday in 2017 call our booking team on 0117 304 1122.