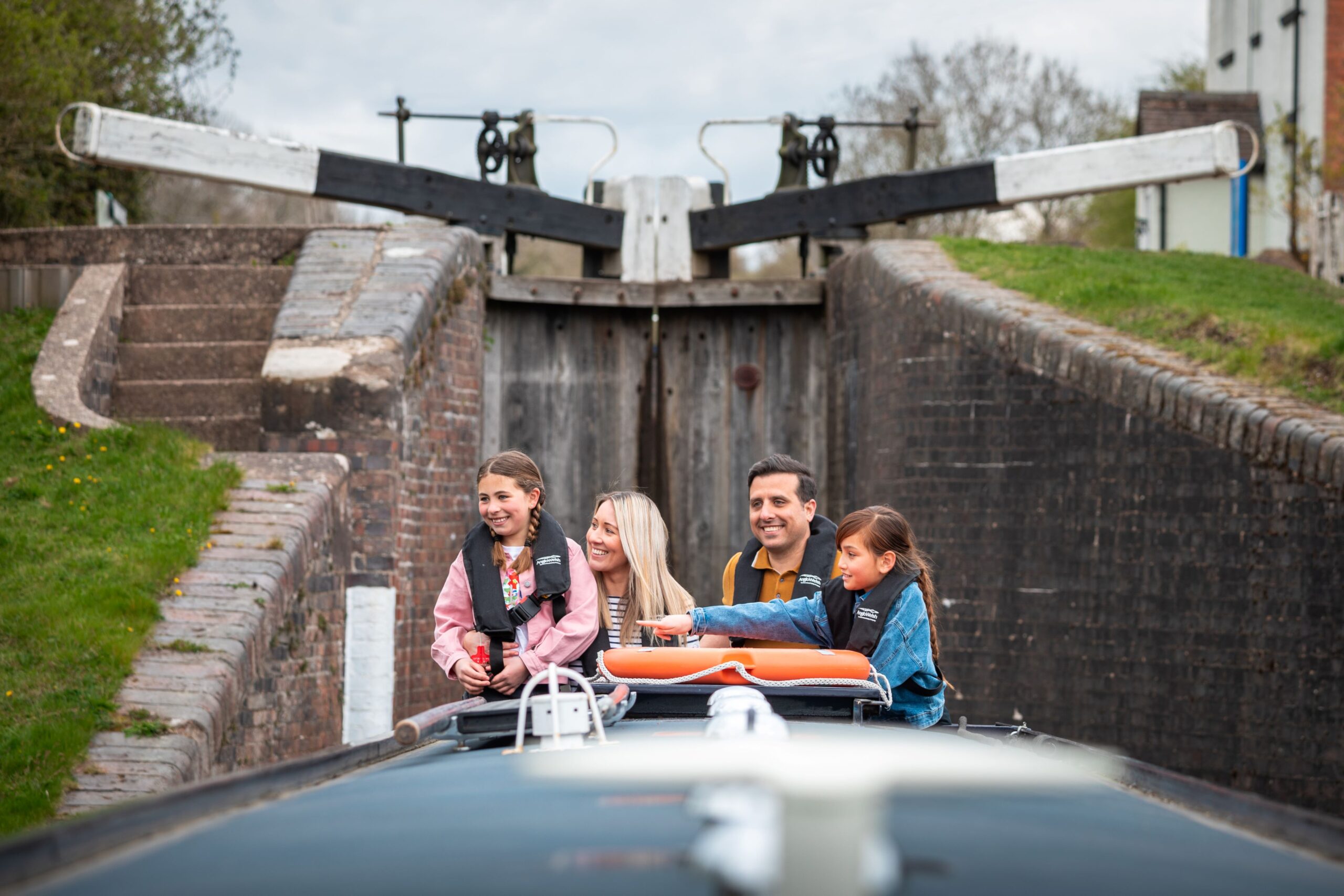 We are offering discounts of up to 20% on our holidays departing in August 2022.  To celebrate, reservations manager Emma Lovell, has put together a guide to our top family canal boat holiday destinations this summer.

Canal boat holidays are great for families, offering the change to experience life afloat exploring Britain’s beautiful canal network.  Along the way, you can watch out for wildlife and stop off at exciting waterside destinations.

Our narrowboats are like floating holiday cottages, with everything you need for a self-catering staycation afloat. This includes comfy beds, hot water, TV, WiFi, well-stocked kitchens, showers and flushing toilets.

To celebrate our offer, we’ve listed our Top 9 family destinations this summer, all suitable for beginners:

Setting out from our base at Wootton Wawen, it’s a delightful six-hour journey through the Warwickshire countryside to Bancroft Basin, in the centre of Stratford-upon-Avon.  The journey along the Stratford Canal passes through 17 locks. From Bancroft Basin, it’s a short walk to the Dell, an outdoor stage in Avonbank Gardens.  A series of free outdoor theatre performances are taking place in the Dell this summer.  These include the Merchant of Venice performed by the Edinburgh Graduate Theatre Group, 27-28 August.

Cruising from our canal boat hire base at Tardebigge, it’s a five-hour journey to Birmingham City Centre.  You’ll cruise along the Worcester & Birmingham Canal to find moorings at Gas Street Basin.  From there Brindleyplace, home to the National Sea life Centre, is a short walk away.  Here you can experience the UK’s only 360 degree Ocean Tunnel, see the Penguin Ice Adventure and meet the UK’s first Sea Otters.

From our Oxford base, it’s a tranquil three-hour cruise along the River Thames to moorings at Hythe Bridge.  This is the perfect base for exploring Oxford’s city centre.  One of the City’s most popular attractions is the fascinating Pitt Rivers Museum.  Here thousands of archaeological and ethnographic objects from all over the world are on display.  Some of the most famous exhibits include a 17th Witch Bottle and an 11-metre high totem pole.

Setting off from our narrowboat rental base at Bunbury, it takes seven hours to reach the ancient City of Chester.  The journey along the Shropshire Union Canal passes through nine locks.  Once there, you ca visit the award-winning Chester Zoo.  The Zoo is home to 21,314 animals from 500 species, including nine adorable new penguin chicks born there.

5. Watch the Wars of the Roses Show at Warwick Castle

On a narrowboat holiday departing from our Stockton base, it’s a seven-hour journey to Warwick.  You’ll travel along the Grand Union Canal, passing through 20 locks along the way.  Once there, you can visit the magnificent medieval Warwick Castle on the banks of the River Avon.  The Castle offers a fantastic family day out with ramparts to climb, the Castle Dungeon, Great Hall and Kingmaker Exhibition to explore.  There’s also soaring birds of prey and trebuchet firing displays to watch.  And this summer there will also be daily live Wars of the Roses shows, recreating the historic jousting battles of the 15th century.

6. Travel across the Stream in the Sky to Ellesmere

Departing from our Trevor base on the Llangollen Canal in North Wales, you can reach the Shropshire town of Ellesmere in seven hours.  Along the way, you’ll travel across the UNESCO World Heritage Pontcysyllte Aqueduct.  This incredible structure, also known as ‘The Stream in the Sky’, carries the canal 38 metres high above the Dee Valley.  Once at Ellesmere, in the heart of the Shropshire Lake District, you can take time to explore the Mere.  The Mere has Victorian gardens, woodland paths, historic castle and lots of wildlife.

Navigating from our Tardebigge base, it’s an eight-hour journey to the Black Country Living Museum.  The route travels along the Worcester & Birmingham Canal and passes through three locks. Visitors to the Museum this summer will find history brought to life by historic characters, telling the story of what it was like to live and work in one of the first industrial landscapes in Britain. Families can enjoy watching live demonstrations, taking part in old fashioned street games, visiting the vintage cinema, and enjoying traditional fish and chips.

8. Visit the Caen Hill flight of locks at Devizes

From our base on the Kennet & Avon Canal at Monkton Combe near Bath, it takes around nine hours to reach the base of the Caen Hill flight. The journey travels 15 miles and passes through eight locks. The breath-taking sight of the 16 locks in a row, part of a total of 29 locks, is truly one of the most spectacular of Britain’s inland waterways.  The historic market town of Devizes is a short walk away, with its Wadworth Brewery Visitor Centre and famous shire horses making daily deliveries. Devizes also has a great range of independent shops, pubs and restaurants, including the Bear Hotel.

9. Get close to nature at Fradley Pool Nature Reserve

Setting off from our Great Haywood base near Stafford, it takes around six hours to reach Fradley Junction.  The journey travels 12 miles along the Trent & Mersey Canal, and passes through five locks.  Picturesque Fradley, offers visitors guided walks, a café, two pubs and Fradley Pool Nature Reserve, home to an abundance of wildlife.  Along the way, you’ll pass the National Trust’s Shugborough Estate and Cannock Chase. As well as a number of rural family-friendly canalside pubs, including the Wolseley Arms near Rugeley.

Moor up at the Birmingham 2022 Commonwealth Games 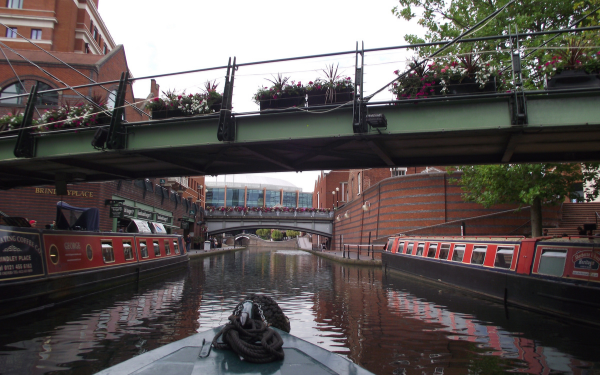 The city of Birmingham has more canals than Venice, so it’s not surprising that eight of the 13 venues for the Birmingham 2022 Commonwealth Games are on or very close to a canal.

Taking place from 28 July to 8 August, the Games will see around 4,500 athletes from 72 nations and territories compete in 19 different sports and eight Parasports. To celebrate the opportunity to visit the Birmingham 2022 Commonwealth Games and their venues on a narrowboat holiday, we’ve published our Top 8 Games destinations afloat:

3. Travel to Coventry Stadium from Stockton

From our narrow boat hire base on the Grand Union Canal at Stockton, it takes 15 hours to reach Coventry Basin, travelling 36 miles and passing through seven locks. The route navigates up the North Oxford Canal and joins the Coventry Canal at Hawkesbury Junction. Coventry Stadium will be hosting the Judo, Rugby Sevens and Wrestling events.

4. Navigate to the Alexander Stadium from Tardebigge

It takes around 13 hours, travelling 28 miles and passing through eight locks to reach Perry Barr Top Lock from our Tardebigge base. The journey begins on the Worcester & Birmingham Canal, and transfers onto the Birmingham Canal Navigations at Worcester Bar.  Alexander Stadium will host the Athletics events.

5. Cruise to St. Nicholas Park in Warwick from Wootton Wawen

From our base at Wootton Wawen on the Stratford Canal, it takes around 12 hours, cruising 14 miles and passing through 38 locks to reach moorings at Saltisford in Warwick. Myton Fields, the other side of the river to St. Nicholas Park will be used for the Birmingham 2022 Cycling Road Race.

6. Travel round the Stourport Ring from Tardebigge

From our Tardebigge base, on a week’s break you can navigate the Stourport Ring. The journey passes through 118 locks and takes around 44 hours. It takes in sections of: the Staffordshire & Worcestershire Canal; Worcester & Birmingham Canal Navigation; the River Severn; Birmingham Canal Main Line; and Stourbridge canals.  It takes boaters close to Egbaston Stadium, where the Cricket T20 will take place, and the Birmingham Arena where the Gymnastics will take place.

7. Cruise to Victoria Park in Leamington Spa from Stockton

From our Stockton base on the Grand Union Canal it takes around seven hours, travelling seven miles and passing through 20 locks to reach Frost’s Wharf in Leamington. Victoria Park in Leamington Spa will host the Lawn Bowls and Para Lawn Bowls events.

8. Navigate the Warwickshire Ring from Stockton

From our Stockton base you can navigate the Warwickshire Ring. This popular circuit travels 104 miles, passes through 94 locks and takes around 53 hours. It can be done in a week, but it’s best to allow 10 days or two weeks so that you’ll have time to visit places along the way. The Warwickshire Ring travels sections of the Grand Union Canal (passing through Leamington Spa and Warwick), the Coventry Canal and Birmingham & Fazeley Canal.  Games venues on or close by the route include: Birmingham Arena (Gymnastics); Edgbaston Stadium (Cricket); Coventry Stadium and Arena (Judo, Rugby Sevens, Wrestling); St Nicholas Park in Warwick (Cycling Road Race); and Victoria Park in Leamington Spa (Lawn Bowls).