Boats, Basins and the Bard. Celebrate 400 years of Shakespeare on an Anglo Welsh canal boat. 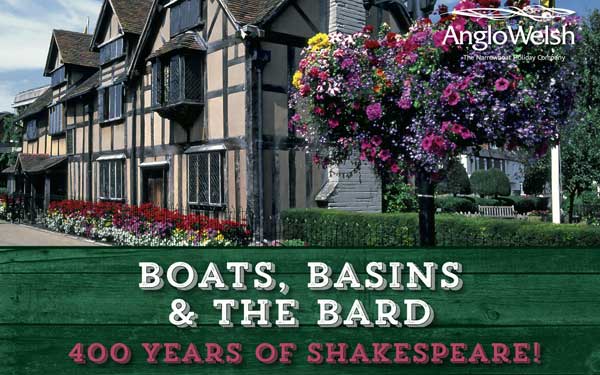 Stratford-upon-Avon is gearing up for a very special celebration of its most famous son. On April 23rd the historic town commemorates 400 years since the death of William Shakespeare, making the next few months the perfect occasion to visit the Bard of Avon’s home on this historic river crossing. And with heritage and culture on the agenda, what could be more fitting than arriving at Stratford on a traditional narrowboat?

“We are only a gentle 6-mile cruise from Stratford-upon-Avon so visitors come to us from all around the world for the triple delight of pretty canals, cute boats and Shakespeare,” says Alistair King, Manager at Anglo Welsh’s picturesque Wootton Wawen base. “In fact, it’s become something of a tradition for people to plan their canal trip with us after buying tickets for a Shakespeare play.”

“Mooring one of our narrowboats at the basin directly in front of the Royal Shakespeare Theatre after a day on the River Avon is a memorable experience. There really is no better way to arrive in the heart of Stratford than in a floating hotel room!”

There is never a bad time to visit Stratford-upon-Avon, but for lovers of the Bard this year provides a feast of culture. The Royal Shakespeare Company is performing A Midsummer Night’s Dream at the Royal Shakespeare Theatre from February 17 until July 16 and the RSC season also includes productions of Hamlet, Don Quixote and The Alchemist.

Meanwhile, The Shakespeare Birthplace Trust is transforming the site of Shakespeare’s family home into a heritage landmark. Visitors will be able to walk in the Bard’s footsteps and trace his footprints in a contemporary landscape setting. On April 23rd, the RSC will offer a fun-packed day of outdoor events including a breathtaking acrobatic show and a spectacular firework display.

“Stratford-upon-Avon may be our most glamorous destination, but for weekly cruises and longer hires there’s no shortage of great routes from Wootton Wawen,” says Alistair, who as a Solihull native fulfilled a childhood dream when he started working at his local Anglo Welsh base in 2011. “The Avon Ring, the Warwickshire Ring and the Grand Union Canal all combine lovely canal routes with historic landmarks like Warwick Castle, Tewkesbury Abbey, Worcester Cathedral, and the famous Hatton Flight of Locks. I also recommend the Edstone Aqueduct, the longest aquedcut in England and one of three along a 4-mile stretch of the Stratford Canal. And this year we’re celebrating the bicentennial of our small local aqueduct at Wootton Wawen … not quite 400 years like Shakespeare, but still worth raising a glass to!”

Click here for more information on all Wootton Wawen’s narrowboat routes and waterways.