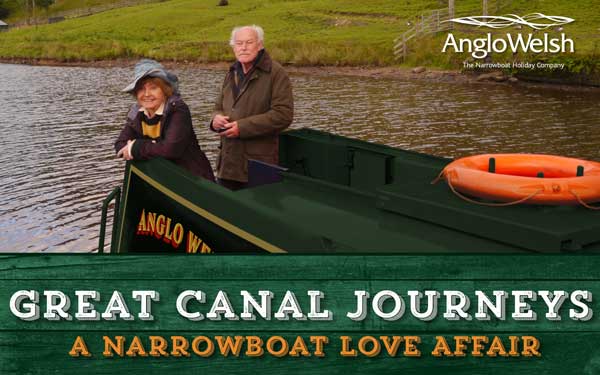 We’ve said it before and we’ll say it again, if you love canals – and the Anglo Welsh team is guilty as charged – you have to love Channel 4’s ‘Great Canal Journeys’, now back on our screens for a third series.

Husband and wife team Timothy West and Prunella Scales are self-confessed ‘canal nuts’, and despite their advancing years (he’s 81, she’s 83) and Prunella’s fragile health, they have no intention of hanging up their canal ropes. Married for 53 years, the thespian couple have created a lifetime of memories on stage and screen (who can forget Scales’ arch portrayal of Sybil in ‘Fawlty Towers’?), but away from acting they have lived a very different life exploring the stunning waterways of Britain by canal boat.

Each episode of ‘Great Canal Journeys’ reveals the rich and diverse history and culture of canal life, explores the beautiful scenery of Britain’s landscapes and wildlife, while giving Timothy and Prunella the chance to recreate some of their most treasured family moments. It proves to be a charming insight, not just into their lifelong passion for narrowboats, but also their half-century love affair, a relationship laced with poignancy now that Prunella suffers from Alzheimer’s.

One of the first ever journeys featured on ‘Great Canal Journeys’ was a trip on an Anglo Welsh narrowboat along the Oxford canal where the couple took their first boating holiday as a family with sons Sam (actor Samuel West) and Joseph more than 40 years ago. Another memorable canal trip took Prunella and Timothy back to their honeymoon destination, Llangollen in North Wales, now Anglo Welsh’s largest base.

Cruising along by narrowboat, the couple have also revisited the picturesque Kennet and Avon canal in the West Country, which they helped saved from closure a quarter of a century ago. In the current series, they travel from Birmingham to Braunston, Northamptonshire for a festival of canal boats and to unveil a plaque to a late friend and canal campaigner.

Last year it was revealed that Scales’ Alzheimer’s means she can barely remember any of her 53-year marriage to West, but as her still doting husband explains, “Pru doesn’t remember things very well, but you don’t need to remember things on the canal because you can enjoy things as you see them, so it’s perfect for her really.”

“Do I know where we’re going or why we’re going there?” asks Prunella at one stage. “Well, sometimes I do, but sometimes I just want to watch the countryside float by.” Relaxing on a narrowboat, cruising along a canal, watching the world go by … ‘Great Canal Journeys’ shows that canal holidays are a heartwarming way to spend time with your nearest and dearest, whether you’re young newlyweds or lovebirds in your dotage.