Narrowboating in style – John Craven holidays on the Llangollen Canal 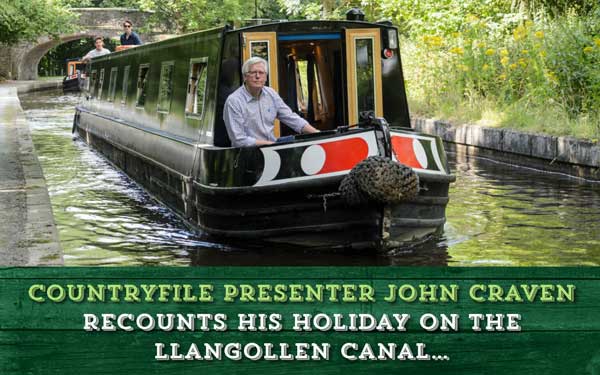 Earlier this year, we were delighted to welcome Countryfile presenter John Craven, and his two eldest grandsons for a short break narrowboat holiday, setting off from our canal boat hire base at Trevor on the Llangollen Canal in North Wales.

Although John has been fascinated by canals all his life and been a vice-president of a canals trust, he’d never before taken a canal boat holiday.

This summer he set off with Charlie, aged 18, who apparently proved to be a “natural-born skipper” and 15-year-old Will – “the ideal lookout and rope handler”.

John’s article about his journey is published by Countryfile Magazine, 15 October 2017 www.countryfile.com

John explains: “From the 2,000-mile network of navigable canals in England and Wales, we chose a 20-mile stretch of the Llangollen and it turned out to be a perfect microcosm of Britain’s waterways heritage. It encompassed both countries and put us to the test with two aqueducts, 57 bridges, two locks and three tunnels – quite an initiation for first-time narrowboaters piloting a 67ft craft.”

They collected their narrowboat, Askrigg, from Trevor Wharf close to the UNESCO World Heritage Pontcysyllte Aqueduct, which John explains has: “18 stone pillars and 19 cast-iron arches” that “carry the canal at a height of 38m (126ft) over the River Dee.”

Oliver from Anglo Welsh gave John and the boys their tuition, showing them how to handle the Askrigg, pushing the tiller right to go left and vice versa, putting the engine in reverse to stop as there are no brakes, driving on the right and pointing out “the horn (essential for warning boats coming towards us round sharp bends), the headlights (which must be switched on before entering tunnels)”.

John explains, “no licence is needed to pilot a narrowboat and after Oliver had travelled with us for a short distance to make sure we had understood his instructions, he left us to continue along on our own.”

Navigating through the Vale of Llangollen

John and his crew began their journey by heading four miles west to the Eisteddfod town of Llangollen, explaining that here the canal “runs along the steep slopes of the Vale of Llangollen and becomes so narrow in places that only one-way traffic is possible. Just to be on the safe side, Will had to run a few hundred yards ahead to make sure nothing was heading towards us and then phone me with an all-clear.”

Checking out the boat’s interior

After mooring in the marina at Llangollen, John describes the interior of their boat as “narrowboating in style” with “everything we could possibly need – two showers, a double bed and two singles, a smart kitchen with a fridge and freezer, small gas cooker, a dining table with bench seats that could convert into an extra bed, two easy chairs and a TV.”

Travelling over the Pontcysyllte Aqueduct

John then describes their journey the next day across the Pontcysyllte Aqueduct: “Entering the aqueduct is one of those never-to-be-forgotten moments. It is, essentially, a 307metre-long metal trough that is just about wide enough for one boat. On one side is the towpath and on the other a sheer drop down to the valley floor – not a view for anyone with vertigo.”

John then talks about the history of the aqueduct, explaining: “It took 10 years to build and was completed in 1805, at the cost of £38m in today’s money and one navvy’s life. One of the geniuses behind it is one of my heroes: the great road and canal builder Thomas Telford and I felt honoured to be crossing a structure that he had helped to build.”

John and his crew then navigated two tunnels and he explains: “there’s a very simple, sensible rule for tunnels: if you see headlights in the dark, don’t enter.”

After the second tunnel at Chirk, they crossed the Chirk Aqueduct and soon after moored up for the night at the Poacher’s Pocket pub at Gledrid. At the pub that night they reflected that all of the 11 miles they’d covered from Llangollen “are part of a UNESCO World Heritage Site, and rightly so. We had pottered down tree-lined watery avenues, past wide-open countryside and across spectacular constructions.”

On describing day three of their journey, John says that “patience is a necessary ingredient of canal travel” said they filled their water tank from the water point whilst waiting to negotiate the twin locks at New Marton, “Charlie then guided Askrigg confidently into the locks” while John and Will operated the gates and paddles.”

To Ellesmere and back

John says: “The canal was busy in both directions all the way to Ellesmere, which kept us on our toes. But on the way back, after a night tied up next to the beautiful Blake Mere on the far side of Ellesmere tunnel, there was very little traffic and we had the waterway almost to ourselves. Apparently canals can be like that: unpredictable.”

Songs at the Aqueduct Inn

On their fourth and final night, John and his crew moored a few hundred yards from their journey’s end at the Aqueduct Inn as they had to return their boat by 9am the following morning.

He says the Aqueduct Inn is “an old pub with great food and fine views from its wooden balcony. It also provided a wonderful and unexpected finale to our adventure.

“The staff were clearing our plates away when into the bar came a large group of men in ties and blazers. Not long after entering they started to sing. It wasn’t the usual pub singalong stuff but beautiful songs with glorious harmonies and, after a short while, I began to recognise some of their faces from a Countryfile programme I had made with them years ago.

“They were members of the internationally renowned Fron Male Voice Choir and they were wetting their whistles after their regular Thursday-night practice and had decided to perform an impromptu encore in their local for a few of the regulars and Charlie, Will and me.”

Back across the Aqueduct

The next morning they took Askrigg back across the aqueduct to our narrowboat hire base at Trevor and John reflects: “It had been an exhilarating, slow-motion few days. We had glided though breath-taking countryside while being overtaken by walkers and their dogs, joggers, cyclists and kayakers canals aren’t just for narrowboats.

“Many peaceful hours of travelling had been dotted with moments of tension, certainly on my part, as I tried to master the skills needed for a method of transportation that hasn’t changed in centuries.

“We agreed it had been far more than just a short holiday. The Llangollen Canal had given us an experience we’d never forget. Why on earth had I waited so long?”