There’s a lot to be said for messing around on boats, living life beyond the river banks. It’s a wonderful way to slow down, unwind and watch the world go by.

Arriving at the Anglo Welsh boatyard just outside Oxford in the early afternoon, we were shown our floating holiday home – a four-berth 58ft-narrowboat called ‘Knighton’. 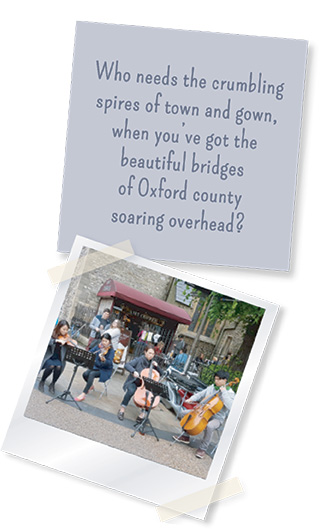 It had everything needed to keep the smiles coming – a solid double bed at one end, a delightful living room at the other and a compact and bijou galley in the middle. It also had a snug bathroom and central heating. A perfect boat for seven days of relaxing adventures.

We’ve been on canal boat holidays with Anglo Welsh many times before, but we felt reassured after our comprehensive handover from the professional staff. All the narrowboats are slightly different and our safety and wellbeing are at the core of the handover… so it is well worth paying attention.

Once we had our things on board, we cruised off down the River Thames and found ourselves in the heart of the Oxfordshire countryside, the green hills gently rolling away as far as the eye could see.

Ahead there were tantalising glimpses of the slender spires of Oxford, but before getting there, we had to put our minds to the serious business of mooring up for the night. Godstow Abbey is a sweet spot to stop with a picturesque pub just over the bridge. On our way back to the narrowboat we went for a stroll and found a sign reading ‘Be Your Beautiful Best. We decided to make it our motto for the week ahead.

The next day we headed on down the river to Oxford. After a gentle morning mooching along the water, we moored up and went into the historic city centre to explore.

It’s very cute, obviously. If Willy Wonka did architecture, this is the sort of place he’d come up with. As if to prove it, when we strolled along in search of coffee and cake we found a four-piece string quartet playing next to an outdoor café. It really was the cherry on the cake. 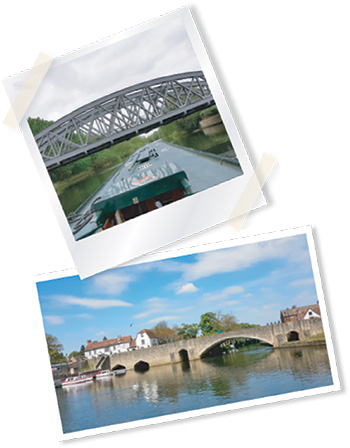 Drifting through Oxford on a narrowboat, you can’t fail to notice the swarms of rowers out on the water. They’re lovely to watch but prone to get up to mischief. They splash and twirl their way around the river like crazy boat-borne ballerinas. Think watching Formula 1, but with less revving, more rowing and much slower bumps.

We thought the famous university city would be the cutest place we’d pass during our canal boat holiday, but we were wrong. Approaching Abingdon by water the next afternoon was like watching a picture postcard come to life.

Luckily, even though the River Thames runs right through the middle of town, we were able to find a quiet spot to moor in a delightful meadow just moments from the action.

We were getting into the swing of life afloat. It’s very restful. You steer the boat, drink tea and watch the countryside glide past at walking speed. Then you moor up and go in search of pleasure and pubs. It is very easy on the soul.

As were the procession of bridges that we passed under. Whether they were built for trains, cars, people or bikes, made of stone, steel or wood, there was something lovely about every single one of them.

We turned around and got ready for the return leg of our narrowboat journey. But first, Mrs Cullimore decided it was time to do some holiday shopping and I persuaded her, somehow, to pick up a garden sprinkler – probably the strangest souvenir we’ve ever brought home.

As we made our way back up river over the next few days, I tried to work out my favourite thing about a being on a narrowboat. Was it the ever present wildlife, the fabulous scenery or the sheer joy of having a rock’n’rolling home? No, it was something even better. It was the passers-by.

Whether they’re on another canal boat, on the towpath or just enjoying the view, their waving, smiling and chatting brightens every day.