Enjoy the Olympics on board a stylish canal boat 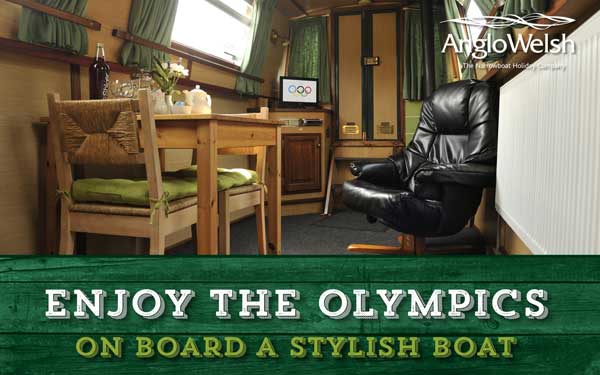 Navigating through canal locks may not be an Olympic event (yet) but that won’t stop the Anglo Welsh team getting behind our sporting heroes at this summer’s games in Rio. “We all remember special moments from London 2102, like when Ben Ainslie took his fifth consecutive sailing medal, and his fourth consecutive gold. However there was a heavy battle with Jonas Høgh Christensen of Denmark that was only decided at the last mark of the medal race, nail biting times!” says Steve Harrison, who has worked for Anglo Welsh since early 2016.

“Whether it was cruising along the Llangollen canal watching the spectacular opening ceremony on TV or moored alongside a canal side pub to cheer Mo Farah across the finishing line on what has come to be know as ‘Super Saturday’, described by Sebastian Coe as sport’s greatest ever day.”

“We’ve all got high hopes for Team GB in Brazil,” continues Steve, “let’s just hope they do better than England’s footballers at the 2014 World Cup in the same country!

At the London Olympics, Great Britain won 65 medals, our biggest haul since 1908.

In 1976, the year Anglo Welsh was founded, Britain managed just 13 medals at the Olympics in Canada. Then again, we started with approximately 90 boats and now we’ve got 160. Everybody’s moved onwards and upwards in 40 years.”

Forty years ago, sports fans who took to the waterways during the Olympics had to make do with dodgy transistor radios to follow the action from their canal boats. Luckily, that’s another thing that has changed for the better. These days all Anglo Welsh narrowboats have an LCD television aboard, not to mention wi-fi connections*.

Some canal boaters will relax below deck and watch the Games on TV; others will follow the action on their laptops while lounging on deck. Those who enjoy a more boisterous atmosphere will join the crowds in the traditional pubs that line the waterways. Fresh air, beautiful canals, sporting heroics, a celebratory drink or two: unless you’ve bagged a ticket to Rio de Janeiro, a stylish narrowboat seems like the perfect Olympic venue.

Even better, Anglo Welsh’s exclusive summer 2016 promotion offers 20% off all Constellation and Bond class bookings for holidays taken before September 4th. The only thing you need to do to secure this Olympian class offer is to book your narrowboat hire before the end of July**. On your marks, get set, go!

*TV and wi-fi connections are subject to signal

**For new bookings only, subject to availability. This offer cannot be used in conjunction with any other offers. Only available on Anglo Welsh Boats until September 3rd.
Offer expires 31st July. Terms and conditions apply.