Our Canal Boat Base at Trevor – It’s in the blood 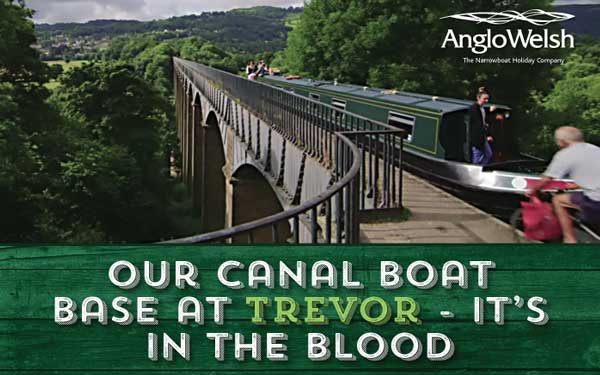 Becca Strong, Admin Manager at Trevor on the Llangollen Canal, tells us why the canal life is in her blood…

Alongside picturesque routes and stylish narrowboats, Anglo Welsh is also renowned for the calibre and commitment of its dedicated staff. ‘Vocation’ is the watchword for a professional team who not only live and breathe canals but are rooted in their local communities. The dynamic duo at the helm at Trevor in Llangollen, North Wales are no exception. Base Manager Matt Anderson first joined Anglo Welsh as a 13 year-old Saturday boy in the mid ‘90s, but he is a narrowboat novice compared to his partner and Trevor’s Admin Manager Becca Strong!

“I grew up in a canal side house alongside the Pontcysyllte Aqueduct, a stone’s throw from Trevor’s wharf, so you could say that canals and narrowboats are in my blood,” says Becca. “My grandad, dad and brother all worked for British Waterways (now The Canal & River Trust) and I first set foot on a narrowboat when I was just 3 years-old. The local waterways have been a big part of my life ever since, so joining Anglo Welsh in 1994 was a real thrill and a proud day for my family.”

Becca and Matt moved back to Trevor in July 2015 after 1o years managing Anglo Welsh’s Tardebigge base in Worcestershire. “It’s great to be back home where we both started,” says Becca, “and we’re relishing the challenge. Trevor is now Anglo Welsh’s largest base with a fleet of 19 holiday boats, including our new Constellation class ‘Aquarius’, 4 day boats, and 10 full-time staff, all of them genuine canal boat enthusiasts.”

“Everybody at Trevor is looking forward to a busy year and we’re already taking bookings for Valentine’s Day, the February half-term and Mother’s Day. As for the peak summer season, it will be all hands on deck and all boats in the water, so I recommend booking early! The Pontcysyllte Aqueduct’s World Heritage status means we are an international destination these days, so as well as locals we get visitors from the USA, Australia, New Zealand, Scandinavia and even from Holland, where they know a thing or two about canal boats!”

So having being born and raised in the shadow of the Pontcysyllte Aqueduct, does Becca have any personal recommendations? “The stretch of canal from Trevor to Llangollen is really stunning with breathtaking views over the valley, beautiful churches, lush countryside and lovely, winding waterways. A crew from ‘Visit Wales’ were here recently filming the aqueduct for ‘The Year of Adventure’ campaign and I can tell you, even seasoned professionals are knocked out by the natural beauty here.

Sailing on a cloud. Broadchurch actor Matthew Gravelle and family on the canals of North East Wales.

The Pontcysyllte Aqueduct, nicknamed the ‘Stream in the Sky’, carries the Llangollen Canal 38 metres (126 ft) above the River Dee. Cruising on a narrowboat without even a handrail on the aqueduct’s south side to obstruct your view of the valley below, you will feel like you are suspended in mid-air! Click here for more information on the Trevor base, routes and waterways.