Behind the scenes at Anglo Welsh. The family that plays together stays together. 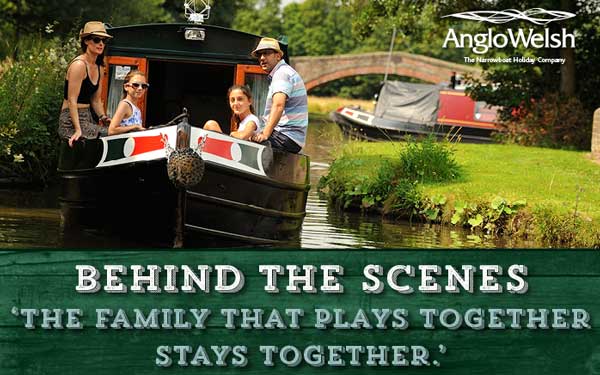 Listening carefully to our loyal customers tells us that people keep coming back to Anglo Welsh because of our fantastic range of narrowboats located at convenient bases on the most picturesque waterways in England and Wales. It also tells us that people value our customer service very highly. In particular, they appreciate the unwavering passion of our canal-loving team.

“People really appreciate being greeted by a familiar smiling face when they hire a boat,” says Carl Cowlishaw, Anglo Welsh’s Operations Manager, “and we do have an uncommonly large number of long-serving staff at our bases. There must be something in the water at Anglo Welsh – excuse the pun – but once people join us, they never want to leave!”

Carl himself soon qualifies for a gold watch, despite still being a youthful 42. “I am now in my 28th year on the canals,” he says, almost wistfully. “I first started working at Anglo Welsh in Great Haywood as a Saturday lad when I was 14. The plan was to earn enough money to catch the bus to Woolworths in Stafford and buy the latest chart singles. If memory serves me right, one of them was ‘I Should Be So Lucky’ by Kylie Minogue!”

“My musical taste has changed a bit since then,” he continues, “but my love of narrowboats and the sheer pleasure of being around canals hasn’t, and I think that applies to many Anglo Welsh stalwarts. Yes, we take our work seriously, but being around boats and on the canals also gives us enormous pleasure. They say ‘the family that plays together stays together’ and that definitely applies to the enjoyment you get as part of the Anglo Welsh family.”

Carl has been Operations Manager at Anglo Welsh since 2005, but before that he’d occupied just about every role going: apprentice, engineer, boat painter, hire fleet manager, base manager. Much to his chagrin, he now spends as much time on the road as on the water. “I visit all ten Anglo Welsh bases at least once a month and also spend time at our Bristol head office where bookings and customer enquiries are handled. But it’s not all admin, I get to monitor the winter maintenance and our boatbuilding programme, and I still try to get out on one of our boats at least once a week.”

So how has the narrowboat sector changed in Carl’s three decades at Anglo Welsh? “People definitely expect a lot more these days,” he says. “To give you one example, we’ve installed wi-fi on the entire Anglo Welsh fleet for 2016. But in 40 years as a leading hire boat operator some things have hardly changed at all. People still come to us because they value the UK’s waterway heritage and enjoy the gentle pace of canal holidays. And they appreciate Anglo Welsh because we offer a large choice of boats and locations but still maintain the personal touch people expect from a great holiday. Early bookings are at a record-breaking high this year, so we’re busy preparing the fleet for an exciting summer season. And hopefully, our customers are looking forward to renewing acquaintances with some familiar faces!”

Our team of experienced and friendly canal holiday experts are available to take your booking.