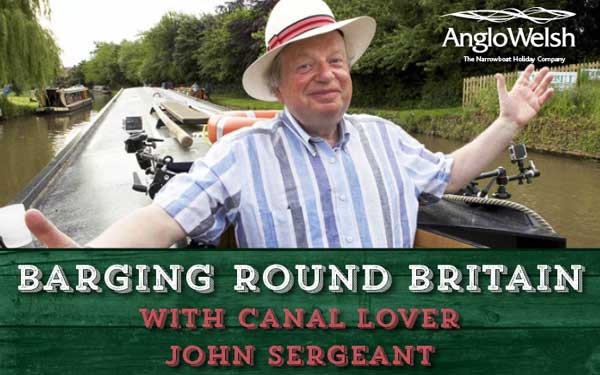 Narrowboat enthusiasts and John Sergeant fans alike will soon be celebrating as the man who shimmied his way into the nation’s hearts on ‘Strictly Come Dancing’ returns to our screens in April with a new series of ‘Barging Round Britain’. And as anyone who watched the first series will testify, Sergeant moves rather more gracefully on waterways than he ever did on the ballroom floor!

“Canal boating is a classic holiday,” says the former political correspondent, who traces the fascinating history of canals, meeting lock builders and families living on houseboats, and witnessing stunning architectural feats. “The British canal network is romantic and quite mysterious. You don’t know where these things are going and then you suddenly come across a tunnel that can go on for a mile – it’s pretty incredible.”

In his most spectacular journey in series one Sergeant cruised over the Pontcysyllte Aqueduct, a thin bridge of water that carries the Llangollen Canal 126 feet over the River Dee in north-east Wales. “Going over the Aqueduct was a highlight. Amazing!” Sergeant recalls. Completed in 1805, this skinny passage is the longest and highest aqueduct in Britain, and took ten years to build. “It’s like a pencil,” he continues. “You look at it and you think, ‘This isn’t going to work,’ because there are no rails or anything. It’s magic.”

‘Barging Round Britain’ isn’t Sergeant’s first go at being a helmsman, but the joys of dawn on a narrowboat are new territory. “I’m overnighting at least once on every trip,” he says, remembering a scene where he appears in his dressing gown on an empty canal. “There’s something amazing about waking up to complete silence. In one place there was nothing – nothing that way and nothing the other way. Just total peace and calm.”

“I’m very interested in history and there are moments when you get a real feel for the past on a narrowboat. It’s astonishing to have the canals still there and be able to use them. There’s no real equivalent. If all the steam trains were still working and you could go by steam all over Britain then that would be. But we can actually do that with canals. OK, they’re not horse-drawn, but the sensation and sights are exactly the same as when they were built. That is really something.”

Why not hire a narrowboat from Anglo Welsh’s base at Trevor on the Llangollen canal and follow John Sergeant’s “amazing journey” over the Pontcysyllte Aqueduct? Our team of friendly canal holiday experts are available to take your booking. Please call us on 0117 304 1122.