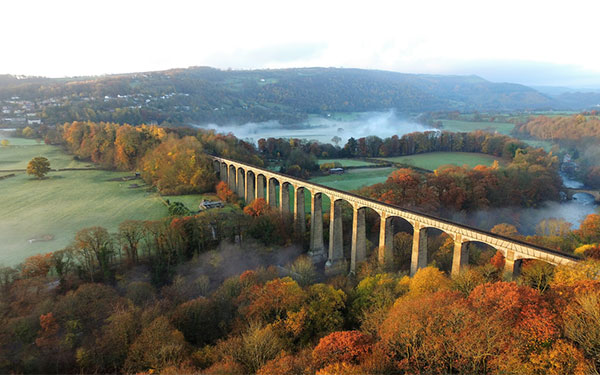 Autumn is a great time to take a narrowboat holiday and enjoy the beautiful colours in the trees and hedgerows along Britain’s beautiful inland waterways network.

All our boats are equipped with the key comforts of home – hot water, TV, Wi-Fi*, well-stocked kitchens, showers, flushing toilets and central heating, so it’s always nice and cosy on board.

Whether you are newcomer to narrowboat holidays looking for an easy route to test the waters, or a seasoned boater looking for a longer more challenging route, here’s a guide to our Top 10 destinations for autumn 2020:

1. Travel through the Shropshire Lake District to Llangollen and back – from our narrowboat rental base at Whixall Marina on the Prees Branch of the Llangollen Canal in Shropshire, it takes around 12 hours to reach the pretty town of Llangollen, on the edge of the Berwyn Mountains. Along the way, you’ll pass through the Shropshire Lake District, across the border into Wales, and over the magnificent Chirk and Pontcysyllte Aqueducts, also known as ‘The Stream in the Sky’. With just two locks to pass through each way, this journey is perfect for beginners on a week away.

2. Journey round the Four Counties Ring – from our canal boat hire base at Great Haywood on the Trent & Mersey Canal in Staffordshire, in the autumn when the days are shorter, you can complete the popular Four Counties Ring on a 10 day or two week holiday. The route, which takes around 55 cruising hours to complete, passes through 94 locks and takes you through the counties of Staffordshire, the West Midlands, Cheshire and Shropshire. Highlights include: the waters at Tixall Wide; the 2670-metre long Harecastle Tunnel; the flight of 15 locks at Audlem; views of the rolling Cheshire Plains; and the Roman town of Middlewich.

3. Cruise through the Worcestershire countryside to Lapworth – from our Tardebigge base on the Worcester & Birmingham Canal near Bromsgrove, it’s a gentle seven-hour cruise through the countryside to the village of Lapworth. With two tunnels but no locks along the way, it’s a great short break for beginners. Once moored up in Lapworth, you can explore the village and visit the National Trust’s Packwood House, with magnificent gardens, including the iconic Yew Garden, where according to legend, the 350-year old trees represent the ‘Sermon on the Mount’.

4. Cruise along the Pennine summit – from our canal boat rental base at Silsden on the Leeds & Liverpool Canal, it takes 13 hours, travelling 22 miles and passing through 15 locks to reach Foulridge Wharf, perfect for a week afloat. The route takes boaters across the top of the Pennines, passing through remote and beautiful countryside, as well as the villages of Bank Newton, East Marton, Greenberfield and Salterforth along the way.

5. Float through the Avon Valley to Caen Hill Locks and back – on a short break from our canal boat rental base at Bath on the Kennet & Avon Canal, it takes around 10½ hours to reach Foxhangers Wharf, at the bottom of the Caen Hill Flight of Locks at Devizes, perfect for a three or four night active short break. Along the way, you’ll pass through 16 locks (eight each way), over two dramatic Bath stone aqueducts at Dundas and Avoncliff, the pretty town of Bradford on Avon with its magnificent 14th century Tithe Barn, and miles of peaceful countryside.

6. Enjoy a floating tour of the West Midlands – on 10 day or two week holiday from our Stockton canal boat rental base on the Grand Union Canal in Warwickshire, narrowboat holiday-makers can tackle the 101-mile, 94-lock Warwickshire Ring, which takes around 53 hours to complete. The route takes boaters along sections of the Coventry, Oxford, Grand Union, Stratford and Birmingham & Fazeley canals. Highlights include historic Warwick with its jaw-dropping medieval castle on the banks of the River Avon, the magnificent Hatton Flight of 21 locks, the pretty canal village of Braunston and Gas Street Basin in the heart of Birmingham.

7. Take a Thames boating holiday to Lechlade – from our narrowboat hire base on the River Thames at Oxford, it’s a tranquil nine-hour, seven-lock cruise west to the pretty market town of Lechlade on the edge of the Cotswolds, perfect for a four-night break. Along the way, boaters travel through miles of peaceful Oxfordshire and Gloucestershire countryside, the village of Radcot with its 800-year old bridge across the Thames and Kelmscott Manor, once the Cotswold retreat of William Morris.

8. Navigate through the Cheshire plains to Chester – from our canal boat hire base on the Shropshire Union Canal at Bunbury, the Roman City of Chester is a delightful seven-hour, nine-lock cruise away, travelling through the rolling Cheshire landscape. Once there, you can moor up to explore this ancient city, home to the most complete City Walls in Britain which date back 2,000 years to the Roman occupation. There’s a two-mile wall walking trail, giving visitors the chance to follow in the footsteps of the Roman soldiers and enjoy panoramic views on both sides.

9. Glide across ‘The Stream in the Sky’ to Whitchurch – on a week’s holiday from our canal barge holiday hire centre at Trevor on the Llangollen Canal in North Wales, boaters can travel to Whitchurch and back, which takes a total of 24 hours, passing through just four locks (two each way). Along the way, you will travel across the incredible UNESCO World Heritage designated Pontcysyllte Aqueduct, which carries the canal in a cast iron trough 38 metres high above the Dee Valley. And you’ll glide gently through the Shropshire Lake District, watching out for wildlife along the way. Once at Whitchurch, you can moor up to explore this pretty historic town with half-timbered buildings, independent shops and restaurants, and way-marked circular walks.

10. Visit Shakespeare’s Stratford – from our canal boat hire base at Wootton Wawen on the Stratford Canal near Henley-in-Arden, it’s a delightful six-hour, 17-lock cruise through the Warwickshire countryside to reach moorings at Bancroft Basin in Stratford-upon-Avon. Along the way, the route takes you across the Edstone Aqueduct and past the village of Wilmcote, with a choice of pubs. Once in Stratford, you can enjoy exploring the home of the Bard, with its many pubs, restaurants, museums, shops and regular markets.