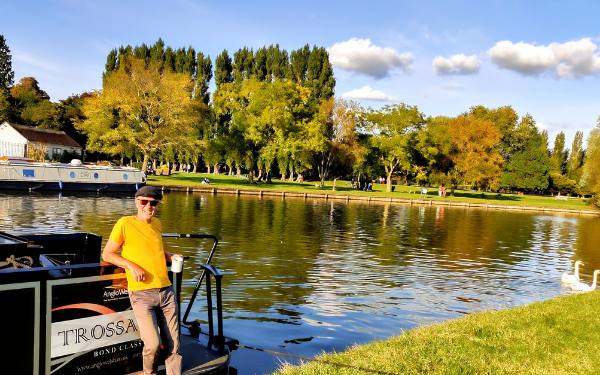 One of my happiest places is when I’m standing on the back of a narrowboat, chugging along, drinking in the scenery, smiling as the world slides on by. All done at walking speed. Sometimes on a canal, sometimes on a river and always, just loving the thrill of it all.

The joy of booking a weeks holiday starting from Anglo Welsh’s Oxford base, is that you get to choose which ever watery adventure you want. You can either head up the Oxford canal, which is a thing of beauty in of itself, or you can drift on down The Thames. Which is rather sublime.

We arrived at the boatyard one early October afternoon, to find it bathed in beautiful autumnal sunshine. According to the forecast, there was a full weeks worth of sun ahead of us. Deciding we wanted to take advantage of the glorious weather to pootle through the wide open spaces of a river, we headed downstream, following The Thames. Wanting to see how far we could get before turning round in time to return the boat early the next Saturday morning.

The first afternoon we only managed a couple of hours gentle travel before tying up for the night next to the picturesque ruins of Godstow Priory, opposite The Trout Inn. Which meant we got to walk the dogs through pretty meadows before heading out for a welcome pint or two at the pub. After that we headed back onboard to enjoy a celebratory supper of carbonara and cava.

Next day started early as we let the dogs out and got chatting to a happy crowd of college friends who had moored nearby. We had all set off from the Oxford base at the same time and compared notes on just how fab the whole experience was. To make things even sweeter, they gave us a cup of sugar, because we mentioned in passing that we had forgotten to bring any along for the tea. Was a reminder of just how friendly and welcoming most people are when you enter the world of waterways. Smiling, waving and chatting is par for the course when you’re on a boat.

After a pretty perfect days cruising we reached Abingdon. A really nice market town nestled on the bank of the river, with a glorious golden stone bridge arching over our heads. Since the sun had been beaming down on us all day, I decided to have a nice cooling swim in the river, with one of the dogs to keep me company. Turned out to be a bit cooler than either of us expected. Definitely made me grateful for the hot showers, central heating and wood burning stove onboard our boat, the good ship, Trossachs. Bond Class. That evening, as the sun set, the moon came up and the bridge lights twinkled, it felt for all the world as if we had drifted into a Parisian scene.

By now we were all well into our stride when it came to cruising along, mooring up and working the locks. Actually, since nearly all the locks are operated by lock keepers, it didn’t take that much team work to make our way through them. We just turned up, smiled and held on to the rope whilst the lock was worked for us. Most marvellous.

Next day was another beauty, just right for being out and about on the water. We enjoyed a leisurely breakfast before setting off, slowly passing through miles of magnificent scenery. When the sun shines and the birds sing, it is easy to believe you are travelling through the prettier parts of France or Holland on this stretch of the river. Though some of the fabulous houses and gardens you drift past are very much English country living at it’s most luxurious.

Being keen on birdlife, the week was turning out to be bumper one. Every day brought plenty of sightings; Kingfishers by the dozen, Red Kites at almost every turn, an assortment of songbirds along with plenty of geese which ever way you looked.

Next day we moored up for the night at Wallingford. Another pretty market town with a square, a High Street full of fine shops and yet another glorious stone bridge soaring over the river. Since we were moored near the Boathouse Inn, we went for a stroll round town, then treated ourselves to a pub dinner of Beef and Ale pies with chips. Mmm. Delicious. Just what the doctor ordered. Next morning we woke to the sound of a gentle knock on the window as a friendly council lady came to collect our £11 mooring fee.

By now, it was Tuesday, so we set off downriver, heading for Goring. Arriving in time for lunch, tying up just a stones throw away from the cottage where George Michael used to live. After a delightful couple of hours pottering round yet another pretty waterside town, we got back onboard, turned the boat round and began the gentle trek back to base. Didn’t get very far, as we saw a couple of mooring pins stuck in the bank, in the middle of open greenery, so decided to “wild camp,” for the night.

Over the next couple of days we retraced our journey, revisiting Wallingford and Abingdon to pick up fresh food supplies. Another perk of a holiday afloat, is that you can eat out, on shore, or you can stay at home on the boat and treat yourself to whatever you want to cook. In our case, thanks to the sunshine, we enjoyed plenty of home made salads along with shop bought sausage rolls, scotch eggs and pork pies. Mmm. Just right for the life aquatic.

When we got back to the boatyard on Saturday morning, we were all sorry to say goodbye to our floating home from home. The good news is, I’m sure we won’t have to wait too long for our next trip with Anglo Welsh. Only question is, where to go next? 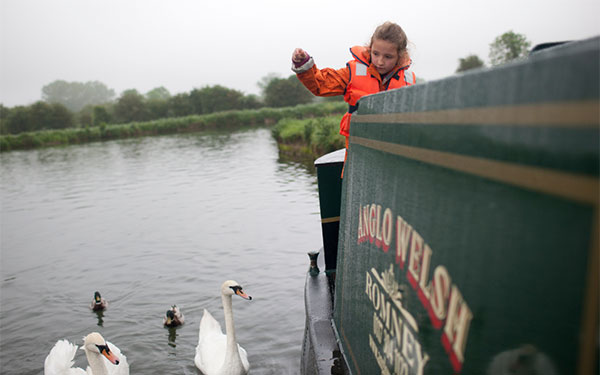