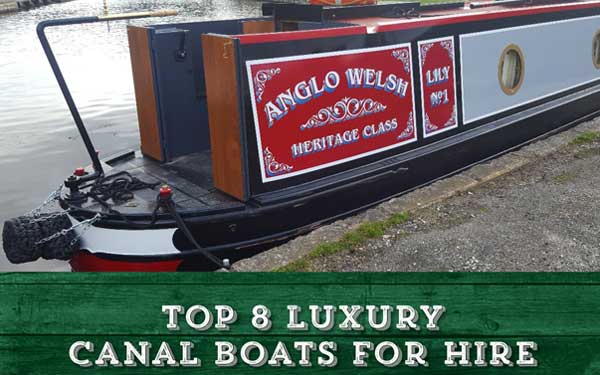 Today’s canal boats are fully equipped with all the essential mod cons – central heating, hot water, TV, fully-equipped kitchens, showers and flushing toilets. To create ever higher standards of accommodation, the length of boat per berth is increasing and new canal boats for hire are arriving on the network with extras like baths, drinks fridges, larger showers, fuel stoves, King-sized beds and WiFi.

Here at Anglo Welsh we’ve been investing in the construction of top class narrowboats, all boasting exacting standards of craftsmanship, comfort and finish.

Our ‘Bond’, ‘Constellation’ and, new for 2018, ‘Heritage’ Class narrowboats are the stars of our fleet, with full-size showers; a range of flexible and private berths; fuel stoves on the four and six berth boats; a large TV and Wifi; spacious kitchens with modern fittings and lighting; and a stylish new livery.

We now offer luxury canal boat hire from eight of our bases, with boats providing top class narrowboat accommodation for either four, six or twelve people. 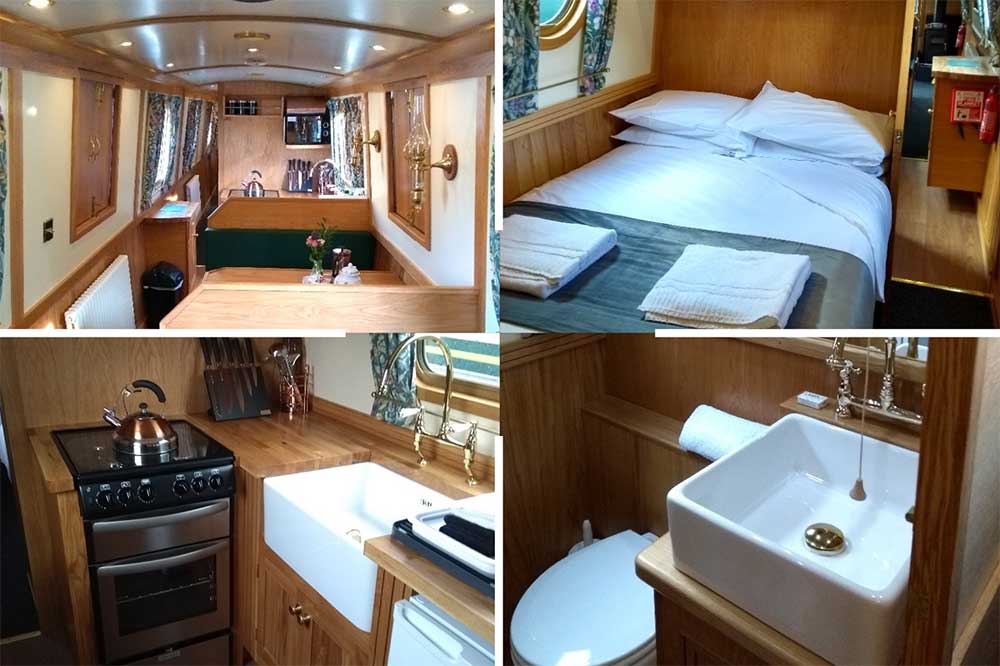 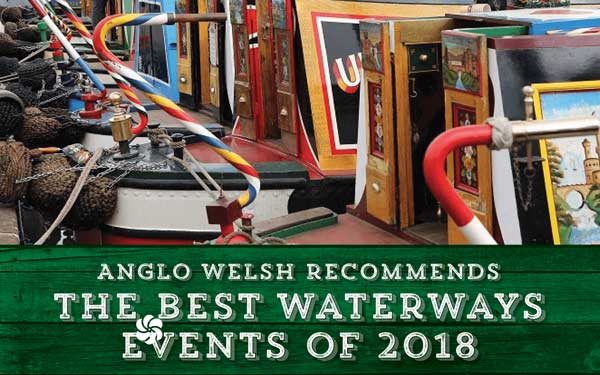 Spring is just around the corner and that sound you can hear in the background is the nation’s canal enthusiasts champing at the bit as they look forward to getting back on their boats to enjoy Britain’s spectacular waterways!

As any good narrowboat skipper will tell you ‘forewarned is forearmed’, so in that spirit of being exceptionally well prepared, Anglo Welsh has put together a schedule of the very best waterway events taking place in 2018. As you will see, you really are spoilt for choice.

Easter Boat Gathering (March 30th to April 2nd), National Waterways Museum Ellesmere Port. Building on the success of last year’s 40th anniversary celebration, the 2018 gathering on the Shropshire Union Canal promises a richly varied and exciting line-up of music, workshops and boat activity for all ages. Over the weekend there will be opportunities for visitors to enjoy behind-the-scenes explorations of the Lime Shed and the boat store in Rossfield Road where vessels raised from the top basin are stored and worked on

Drifters National Open Day (April 15th), five Anglo Welsh locations. Drifters Waterways Holidays and the Canal & River Trust are offering people the chance to try canal boating for free at various locations across England and Wales this year, including Anglo Welsh bases at Wootton Wawen, Great Haywood, Trevor, Tardebigge and Bunbury. The taster sessions will include free short trips on skippered narrowboats as well as boat tours and holiday discounts. People of all ages are encouraged to take part and no advanced booking is required.

St Richard’s Canal Festival (May 4th to May 7th). This annual festival in the Worcestershire town of Droitwich Spa includes boats moored either at Netherwich Basin or alongside the path in Vines Park on the recently restored Droitwich Canal. The event has grown rapidly through the addition of street markets and the Classic and Vintage Car Rally and provides visitors with a great day out in the heart of this historic salt town.

Skipton Waterways Festival (May 5th and May 6th). The gateway to the Yorkshire Dales, Skipton is a beautiful market town with an award-winning high street and market, as well as a 12th century castle. This much- loved event takes place around Skipton and on the Canal Basin. Dozens of narrowboats and other craft will line the Basin and the surrounding towpaths and there will be a full programme of entertainment. A brilliant destination to soak up some history and sit and people-watch at the many eateries overlooking the Leeds & Liverpool Canal.

Crick Show 2018 (May 26th to May 28th). As well as being the canal world’s biggest marketplace, showcasing the inland waterways sector with 300 exhibitors, this annual show on the Grand Union Canal in Northamptonshire offers a fantastic day out for all the family with dozens of boats to look round, free boat trips, live music, children’s activities, a real ale marquee, and a huge variety of food and drink stalls. Last year was the busiest one yet with over 27,000 visitors, so it’s worth securing tickets to the 2018 event early.

Leicester Riverside Festival (June 2nd and June 3rd). Now in its 21st year, this free two-day festival is spread over four areas and promises fun on and off the water. Canal enthusiasts should head for the River Soar area for a narrowboat rally, boat trips, canoe and small boat rides and hires. Nearby Bede Park has family activities galore and the Piazza area has a large stage featuring live bands.

Stratford-upon-Avon Festival (June 30th and July 1st). This is Stratford’s tenth annual river festival and it goes from strength to strength, winning the prestigious Tourism Initiative for the Pride of Stratford Award in 2016! Enjoy two days of fun celebrating Stratford’s beautiful River Avon and the Bard’s wonderful home town. There will be a large display of static narrowboats – including one of Anglo Welsh’s high-end boats – and world class live music, all capped off by a spectacular firework display on Saturday evening. It’s a quintessentially English Summer festival and it’s free!

Audlem Festival of Transport (July 29th). A record number of vintage canal boats are expected at the Audlem Wharf next to Audlem Mill and the Shroppie Fly on the Shropshire Union Canal. A huge range of vintage cars, vans, trucks and buses will also join the 2018 parade.

Black Country Boating Festival (September 14th to September 16th).
Last but not least, the 31st edition of this friendly annual boat gathering and community festival held in the Bumble-Hole Nature Reserve, Windmill End, Netherton. Between 60 and 80 narrowboats are expected in Netherton for the weekend, plus live music, tasty food and a fine selection of local ales. 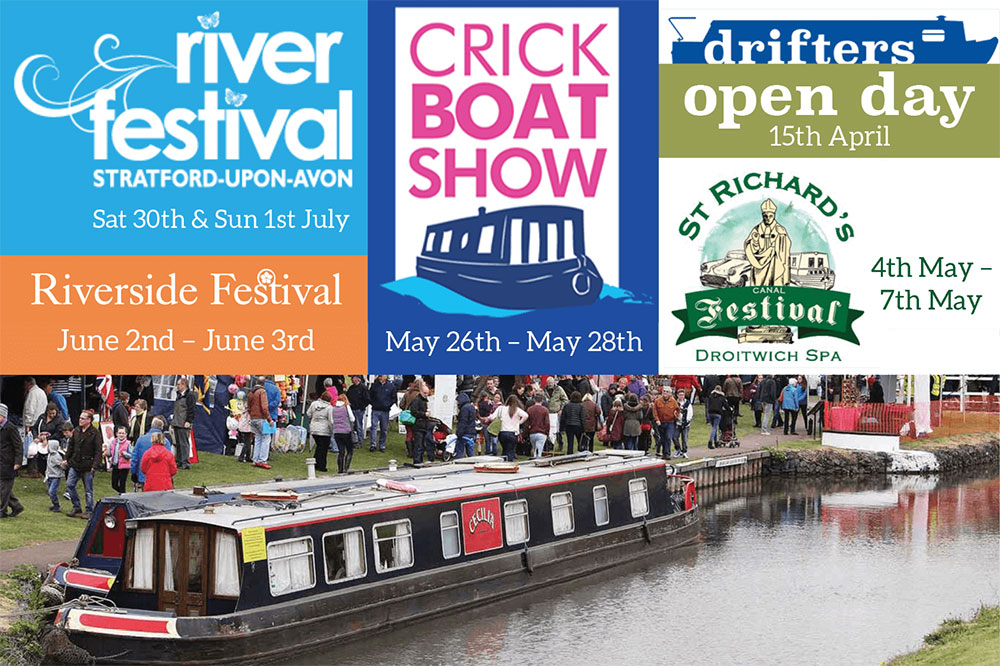