Spotlight on the Canals – The Caldon Canal 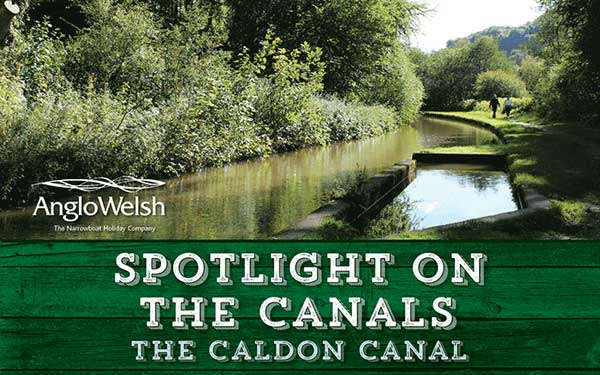 Often described as ‘one of the finest canals in Britain’, the peaceful 17-mile long Caldon Canal runs from the Trent & Mersey Canal at Etruria in Stoke-on-Trent, to Froghall Wharf in the Staffordshire Moorlands.

With 17 locks along its length, the canal passes through moorlands close to Denford, water meadows at Cheddleton and the beautiful wooded Churnet Valley with a restored steam railway running alongside.

In the middle of the Caldon Canal, there’s a 2¼-mile arm towards the historic market town of Leek, and the now derelict 13-mile Uttoxeter extension connects at Froghall.

Opened in 1779, the Caldon Canal was built to carry Peak District limestone for the iron industry and flints for the pottery industry. Freight traffic ceased on the Caldon soon after the railway was constructed alongside, and by the 1960s the canal was virtually unnavigable. But enthusiasts bought the canal back into use by 1974 and the Caldon and Uttoxeter Canals Trust is now working to restore the Uttoxeter branch of the waterway.

On a week’s break

On a week’s break from our narrowboat hire base at Great Haywood on the Trent & Mersey Canal, it’s a 43-hour return journey to Froghall Basin and back, travelling a total of 72 miles through 72 locks.

From Great Haywood, boaters should first head north along the Trent & Mersey Canal to Stoke-on-Trent, to connect onto the Caldon Canal at Etruria.

Along the way, the route passes the village of Weston, with its beautiful village pub on the green, The Woolpack run by Marston’s.

Next, canal boat holiday-makers can enjoy views of the imposing Sandon Hall, its 400 acres of rolling parkland, and Grade II* listed Pitt’s Column.

The canal then passes along the outskirts of Burston, where the family-run micro-brewery Greyhound pub is well worth the short walk to, before reaching the old market town of Stone, said to be the food and drink capital of Staffordshire. Here, there are visitor moorings at Westbridge Park, opposite the Swan pub, and a little further along past the Star pub on the left.

Next it’s Meaford Locks, and then the canalside ‘Plume of Feathers’ pub at Barlaston, now run by the actor Neil Morrissey.

At Trentham Lock, boaters can stop-off to explore the World of Wedgwood, with a factory tour, afternoon tea in the Wedgewood tea room, woodland walks and award winning museum housing a UNESCO protected collection of huge historic and cultural significance.

Just under five miles later, after travelling through the Stoke flights of five locks, the canal reaches its junction with the Caldon Canal at Etruria. Here boaters can stop to visit the Etruria Industrial Museum, the last steam-powered potters’ mill in Britain, or the Spode Visitor Centre, the birthplace of bone china.

By now, the canal is beginning to leave the city behind and at the suburban village of Milton there are two canalside pubs to enjoy, the Foxley and the Miners Arms.

Soon after, boaters encounter Engine Lock, one of the deepest on the canal at 12ft and then the Stockton Brook Flight of five locks, taking the canal up another 45ft to its summit level of 486ft. The Sportsman pub and views of delightful woodlands can be enjoyed along the way, as well as the sight of the disused Stoke-to-Leek railway which crosses the canal above the second lock.

Next along the route, the canal passes through the village of Endon, with a couple of shops on the main road, with beautiful stretches of moorland scenery opening up.

At Hazelhurst Junction, where the Leek Branch connects, amid gently rolling hills, the mainline starts its descent via the three Hazelhurst Locks, before being crossed by the Leek Arm on a brick aqueduct overhead.

The canal takes boaters past Deep Hayes Country Park, where three large scenic pools are surrounded by way-marked woodland walks. Moorings are provided for boaters who want to stop and explore this beautiful park.

Travelling alongside the River Churnet through beautiful countryside, boaters should look out for kingfishers, herons, jays and woodpeckers, as well as otters which have recently returned to the area.

At Cheddleton, there’s the little Flint Mill Museum to visit on selected weekends, a fish and chip shop, post office, supermarkets, Black Lion pub and Old School Tearooms and Craft Centre, as well as the headquarters of the Churnet Valley Railway. Services operate to Consall Forge and Frogall, on both steam and diesel trains.

After Cheddleton, the canal enters ever more remote countryside and merges with the River Churnet at Oakmeadow Ford Lock, where the valley becomes too narrow for both.

At Consall Forge, once home to forges, furnaces and slitting mills, today boaters will find a peaceful village with its secluded Black Lion pub serving good food and real ales, said to be one of the waterway network’s most iconic pubs.

Here the canal leaves the River Churnet, soon reaching Flint Mill Lock, the canal’s last. After, the channel narrows, woodlands close in and the canal’s sense of isolation grows.

Boaters pass beneath the distinctive Cherry Eye Bridge and soon after reach the 69-metre long Froghall Tunnel, which is unusually narrow and low so many craft are unable to pass through. A winding hole beforehand will accommodate 64ft boats and a loading gauge indicates whether or not you can get through.

If you can squeeze through, the picturesque Froghall Basin is beyond, where tramways once converged, bringing limestone from quarries high in the surrounding hills. Today there’s a café (Hetty’s Tearoom), picnic area, waymarked trails and services for boaters, as well as the restored top lock of the Uttoxeter Canal, with a mooring basin.

NB the Caldon Canal can also be reached from our Bunbury canal boat hire base, with the total journey to Froghall and back taking 48 hours, passing through 104 locks.

On a longer holiday

On a 10-day or two-week break from Great Haywood, boaters can travel the Caldon Canal to Froghall and back, and then continue on round the Four Counties Ring, travelling through Cheshire, Shropshire, Staffordshire and the West Midlands, in around 73 hours and passing through 128 locks.

To travel the ring in an anti-clockwise direction, after returning along the Caldon Canal to Stoke-on-Trent, boaters should continue north along the Trent & Mersey Canal, passing through the mighty one-and-three-quarter-mile long Harecastle Tunnel, before emerging at Kidsgrove, and Harding’s Wood Junction, where the Macclesfield Canal meets the Trent & Mersey.

Here boaters encounter the summit of ‘Heartbreak Hill’ – the series of 31 locks which between Middlewich and Kidsgrove, raise the canal 280ft up from the Cheshire Plains.

Setting off down the hill, the Red Bull flight of six locks are the first to be dealt with, followed by the two Church Locks, one Halls Lock and then three Lawton Locks at Lawton Gate.

The next village is Rode Heath with its Royal Oak pub and Rode Hall, one of Cheshire’s most exquisite country houses, which is open to the public on Wednesdays and bank holidays in the summer months.

The South Cheshire Way crosses the canal at Lower Thurlwood Lock, one of a flight of three, then it’s the two Pierpoint Locks, and then there are two more at Hassall Green, just before the canal passes beneath the M6 motorway.

At Wheelock, where there’s a choice of pubs, including the recently refurbished canalside Cheshire Cheese, there are eight locks to negotiate. It’s worth taking a break here, as from Wheelock, it’s a mile-long walk into the historic town of Sandbach, with regular markets, a Waitrose supermarket and plenty of places to eat and drink, including the Saxon Grill Restaurant at the Crown, next to the Saxon Crosses on the cobbled square in the town centre.

There’s a three-mile break from locks as the canal winds round Ettiley Heath and the Sandbach Flashes, a group of 14 wetlands designated as a Site of Special Scientific Interest.

Four miles and another four locks on, the canal reaches the historic market town Middlewich, famous for its salt industry which dates back to medieval times. Here the Four Counties Ring route leaves the Trent & Mersey Canal, heading to Barbridge along the Middlewich Branch of the Shropshire Union Canal.

At this point, boaters on a 10-day or two-week holiday, could take a 20-mile, eight-lock round-trip detour continuing north along the Trent & Mersey Canal, past the Lion Salt Work’s Museum at Marston, to visit the Anderton Boat Lift.This incredible feat of Victorian engineering designed by Edwin Clark, perches on the banks of the River Weaver Navigation like a giant three-story-high spider. Using two huge water tanks with watertight sealable doors, it raises boats 50ft between the Weaver Navigation and the Trent & Mersey Canal.