A multi-generation narrowboat holiday on the River Avon 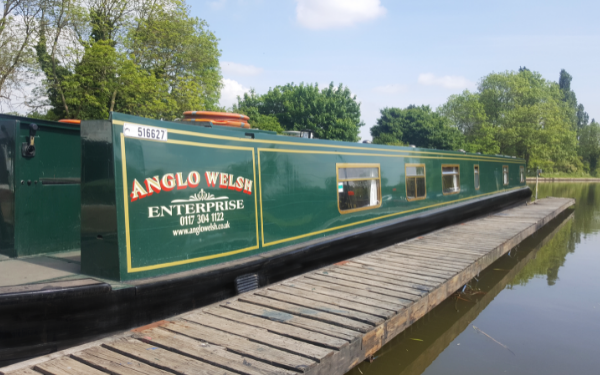 When I was a teenager we once went on a family holiday to San Tropez and I remember looking with envy at the boat owners breakfasting on the decks of their motor yachts in the marina, while we mortals walked by on land. I was reminded of this when arriving at Stratford-upon- Avon’s bustling Bancroft Basin, to find my family who were waiting for me on a barge there, which we had hired for a week’s holiday in August.

Enterprise, a 70 foot long narrowboat, was in pole position, moored side to side with a row of other smartly painted craft. And there was my family, sitting cheerfully at the stern, in the sunshine, enjoying a feast bought from the basin’s street-food market. Hopping aboard it was hard not to feel just a little bit smug on our floating home in pride of place in the historic town while crowds of tourists wandered past.

The others had taken charge of the boat at Wootton Wawen marina in Warwickshire on the Stratford Canal two days before and then navigated down the 17 locks to Stratford. With me, the last member of the crew now on board, we cast off, taking the town lock down onto the broad River Avon that was buzzing with row boats, restaurant boats, flocks of well-fed swans and geese and offering a fine view of the imposing Royal Shakespeare Theatre.

My family and I have been going on canal holidays since I was eight years old. Now my brother and I each have two children (me, sons age 11 and 13, he, daughters age 11 and 15), and my sister has a frisky collie. We all join my parents for a week on the canals every year – nine of us in total.

This year we decided to focus our trip around Stratford-up-Avon, thinking it would add an extra ‘educational’ element for the children. Spending time on the river as well as the canal also appealed as my sister and I were keen to do some ‘wild swimming’ in a river.

The Avon winds from Stratford’s busy centre flowing southwest towards Evesham. As you leave the town, which makes way for stretches of parkland, and then the countryside beyond, the river is soon bordered on both sides by a jungle-like array of vegetation in a thousand greens. Weeping willows lean out and stroke the river’s smooth dark water. At Bidford-on-Avon we passed under a beautiful bridge of stone arches, learning that people have crossed the river there since medieval times.

The river, without the prerequisite canal towpath, felt a more lush and wild boating corridor than many canals. One disadvantage though was not being able to hop off at any point for a walk. And also mooring spots proved to be few and far between and were often already taken requiring us to head on wards. Luckily the evenings were long. Even if the moorings were often full, the river itself, even at the height of summer, was blissfully peaceful and quiet.

Even though we were nine, the 70 foot long Enterprise didn’t feel cramped. Its layout also had the advantage of two dining areas which meant we could gather for card games without having to set up a table specially.

We got as far as Evesham in two days, then turned around. As with all canals, retracing steps feels like a new journey with plenty to look at from the boat from elegant houses with gardens backing onto the river to completely wild stretches. We paused one early evening for dinner at the Four Alls pub beside the river, then had to cruise on until dark until we managed to find a free mooring just outside Stratford. Next morning we rose early to nab a prime spot opposite the theatre, making us perfectly placed for visiting the Shakespeare sites .

First on the list was The Birthplace, a crooked, half-timbered Tudor house on the High Street which had been owned by his glove- maker father, John. Creaky narrow stairs led up to the room where he was born. Having just read ‘Hamnet’, Maggie O’Farrell’s novel based around Shakespeare’s family, the visit was particularly enthralling for me and I was pleased that the children found it engrossing too. A seven minute walk away is the site of New Place, the larger and more splendid home which Shakespeare bought after he became a successful actor and writer in London. The original building no longer exists but you can wander around its garden and admire modern sculptures illustrating how The Bard’s global influence has put Stratford proudly at the centre of the world.

Then finally, the highlight for us, was our visit to Anne Hathaway’s cottage, a 12-room farmhouse, the family home of Shakespeare’s wife – located in once prosperous farm land just beyond the city (a £7 taxi ride). Inside we walked up tiny windy staircases to see bedrooms perfectly preserved as they would have looked in 1582 when 18-year-old Shakespeare was courting Anne, 26. The farmhouse had beautiful kitchen gardens  filled with sage mint and lavender, and an orchard.  So enthused had the children obviously been by the days’ three evocative Shakespeare venues that each even began quoting bits of Shakespeare they knew from school over the dinner table.

Too soon it was our last day. My sister, the children and I rose early to walk a little way upstream along the Avon to Stratford Beach, a swimming spot where Shakespeare himself was said to have taken dips. We plunged shrieking into the silky cool river as the morning sun cast dappled gold around us. Then it was back to Enterprise  for bacon sarnies before readying ourselves to return to the Stratford Canal and to  Wootton Wawen, back up 17 locks over 17 miles, requiring both teamwork and energy.

Luckily by now, we all know the drill.